Ingles is best suited for an up-tempo offense:

Shot tendencies are a positive (not a ball-stopper):

Biggest area for concern with Ingles is that he’s very turnover prone (just 1.28 AST/TO ratio)… by far his biggest weakness as a player. 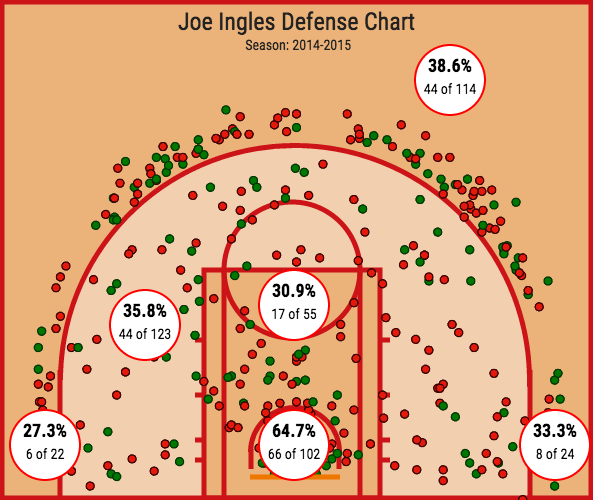 David Blatt: “He was the 15th roster spot or something like that and he’s worked his way into the starting lineup and is a major contributor to a Utah team who has seen great improvement in their game and in their results. Joe was part of a European championship last year. He helped us a great deal. But not a lot of people really expected to see him in the NBA this season. Now he’s a starter and a major contributor so, as a guy who I really like and a guy I got the chance to work with, I’m extremely happy for him.”

Matthew Dellavedova: “I’ve played with him for a few years with the national team. He’s a really good teammate. He’s a character… a very funny guy. He really knows how to play the game. I think he just makes it easier on his teammates. He’s played as more of a 3 with the national team and we haven’t really gone small too often. But I definitely think he’d be capable of [going to the four]. With the way that the NBA’s going with spread offenses and pick-and-rolls, having a four man that can shoot and pass like he can do would be ideal. It’s pretty funny that they’re still making him carry the rookie bag because he’s a veteran. He’s played professionally since he was I think 17 or 18. He just really knows how to play the game. He’s played in big games for the national team and overseas in Europe. He just does all those little things to help the team win.”

Patty Mills: “He’s great. He’s a leader and he’s been playing for a long time now. His ability to play off the ball has been his strength. Then obviously his size and his length as well. When he does have the ball he’s able to make point guard plays and that’s the beauty of his game. His length and his size and his sort of point guard mindset is what makes him unique. He’s definitely played over his time on the national team the stretch-4 at times. All the way from point guard to the 4 and even the 5 at times. That’s the beauty of his skill-set all around.”