• O’Quinn didn’t play basketball until his junior year of high school. He played baseball (catcher) and football (tight end) growing up…. remember that he played catcher; this will help explain something later in the report.

• He experienced a huge growth spurt as a junior in high school and accepted the only D-I recruiting offer extended to him. His Norfolk State Spartans famously upset the #2 seed Missouri Tigers in the NCAA tournament.

(This one is my favorite, notice how O’Quinn leads his slasher to the hoop with the arm gesture prior to making the pass.)

O’Quinn’s passing prowess is likely a result of having to learn how to accurately throw baseballs to locations – rather than people – while playing catcher growing up. Catchers have to cleanly lead their teammates by throwing a strike to second base whenever opponents try to steal the bag.

• O’Quinn is starting to learn how to shoot three pointers: 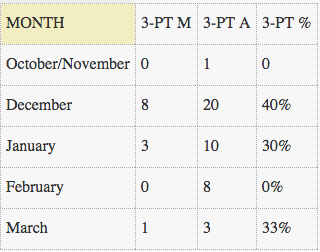 Look at his minutes, month-by-month.

And see how his confidence swings when he is placed into the starting lineup or relegated to the bench.

Based on my final project for Goizueta Business School’s Predictive Sports Analytics class last semester, I found the surprising discovery using a series of linear and logistical regressions, that it’s actually disadvantageous to out-attempt opponents in shots while playing on the road. Tutoring O’Quinn to be more selective with shots on the road could prove to be extra-valuable to any team. He’s shooting an extraordinary 57.4% overall on the road compared to just 38.7% at home.

Millsap was clearly better on the road, so I asked him about it two season’s ago. He confirmed he felt more comfortable playing on the road for this feature. I’ve been fascinated in home-road splits ever since.

Home/Road splits are purely mental. Confidence and trust are needed to empower players like O’Quinn to shoot threes and let him work through his mistakes. He may become a dependable three point shooter in the near future.

But for as promising as O’Quinn can be on offense, he’s exponentially more valuable because he’s a really strong defender:

– O’Quinn ranks 12th in entire NBA at protecting the rim (minimum 40 games played) … Opponents shoot just 46.6% within five feet against him (on 4.6 field goal attempts against at rim per game). Notice the other names on this list… Gobert, Bogut, Ibaka, Hibbert, and Noel.

– In isolation defense, opponents have shot just 8-for-21 (38%) against him… (73rd percentile in the league for defensive effectiveness). He’s fouled just once in 22 isolation match-ups.

– In P&R defenses in which O’Quinn takes the roll-man, opponents are just 4-for-17 on FGA against him (94th percentile).

So, what does this all mean for O’Quinn in a team setting?

What O’Quinn could do to a roster like Toronto’s:

The sample size is admittedly small. Regardless, it makes sense and passes the eye-test that Johnson, Lowry and DeRozan are among the league’s elite finishers off cuts.

Ulterior benefits from having O’Quinn on perimeter:

– Ensures there will be a defensive-minded big man hustling back to prevent transition opportunities.

– Opens the paint up for more ways to create off the drive for teammates.

– For his career, O’Quinn has been a positive contributor to Orlando’s offensive and defensive efficiency while he’s on the court. This season, O’Quinn’s offensive efficiency has dropped slightly as Orlando has tried to make him a bruising power forward alongside Nik Vucevic. O’Quinn is at his best when he has slashing wings and shooters surrounding him on the court:

O’Quinn will be a restricted free agent this summer. With sporadic playing time this season, it’s likely that Orlando would let O’Quinn walk if he received an offer sheet that was too rich for their liking. I would try to lock him up for a four-year contract while his value is still cheap. Perhaps a four-year deal worth approximately $3-5 million annually could do the trick.